Throughout pregnancy, the closed cervix does not allow the fetus to come out of the uterus. Several changes are noted in the cervix during pregnancy. There is increased blood flow to the cervix giving it a bluish color. The glands of the cervix secrete a mucus plug that blocks the opening of the cervix, and reduces the chances of infection.

Prior to delivery, the cervix becomes softer, shorter and its walls begin to thin out. During labor, the cervix begins dilating along with the contractions. A fully dilated cervix of 10 cm allows the vaginal delivery of the baby.

In some cases, the exact cause of incompetent cervix is not known. Causes of cervical incompetence in pregnancy include the following:

1) Abnormality in the cervix, which could occur in:

• Exposure to a drug called DES (diethylstilbestrol) during pregnancy, which can result in an abnormality in the cervix of the female baby. Besides the cervix, abnormalities in the uterus may also be present. This drug is currently banned during pregnancy.

• Conditions like Ehlers-Dandos syndrome, in which the collagen in the cervix can get affected. 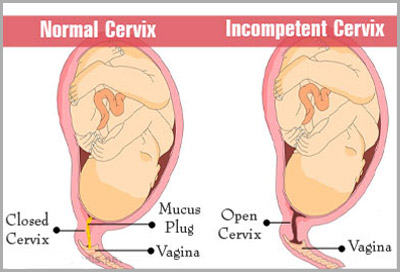 • Medical termination of pregnancy: During this procedure, the cervix may be manually dilated, which could result in incompetence during future pregnancies.

• Conization biopsy: In this procedure, a biopsy is obtained from the cervix in the form of a cone to diagnose for cervical cancer. Thus, there is a loss of cervical tissue, which could result in incompetent cervix.

3) Prior tears to the cervix

A person with an incompetent cervix during pregnancy usually experiences the following:

• Vaginal discharge due to infection of the exposed fetal membranes

• However, it is not necessary to wait for several miscarriages to take place before a diagnosis can be made. Adequate measures should be taken to diagnose and prevent further miscarriages even if one second trimester miscarriage occurs due to incompetent cervix.